Once upon a time there was a boy. And he met this girl. And she was young, a college freshman. Too young to love, but he always smiled.

When four years had passed, their relationship nothing more than a passerby kind of thing, she waved him down outside a small hipster joint on the West End of Providence. She was a girl kids these days would call: a hot mess.

In the midst of a pretty gruesome breakup, this girl wanted nothing to do with this boy- just a smile, so he smiled. And he waited. And one night she called.

This boy and this girl met up for breakfast and it was delicious… only he didn’t drink coffee, or eat meat, and he wasn’t sure he really wanted kids. And she survived on little food, mostly red met, and lots of coffee, and wanted all the babies. But when breakfast was over, and they’d split the bill, she still hugged him and offered to drive him to work. The whole 2 blocks away. He smiled, and pointed to his building, the small storefront on that busy street, with the neon sign lit up.

It was his smile that lured her back in. It’s not like she wanted to date him. He didn’t drink coffee, or eat meat, or want babies. But he’d smiled at her and he liked whiskey, so asking him to a bar couldn’t hurt.

In all her early-20’s glory, his early 30’s seemed so profound. Where she was lost in every dark alley, he was a light. So they had some drinks, and she treated him to more. And the ice clinked, and the laughter abated and the night ended.

But there were more.

And he never went away. No matter how hard she pushed.

With the pushing and all the days blurring with the nights and everything not being perfect, who knew it was actually ideal?

On August 2, 2009, this boy and this girl made it official in front of friends and family. And since that time some of those friends have left the circle, and more have joined. A few of those family members are dearly departed. But that boy and that girl, they still love each other, just a bit more each day.

Where once presents were cute and impractical, they’ve been replaced with deeper thought and concern. A goal of reviving a part of that person that was once just a kid, on a street, holding hands with another kid- walking the West End of Providence after midnight.

I fell in love with you because you loved me at a time I could not love myself. Click To Tweet 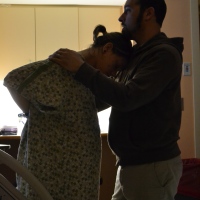